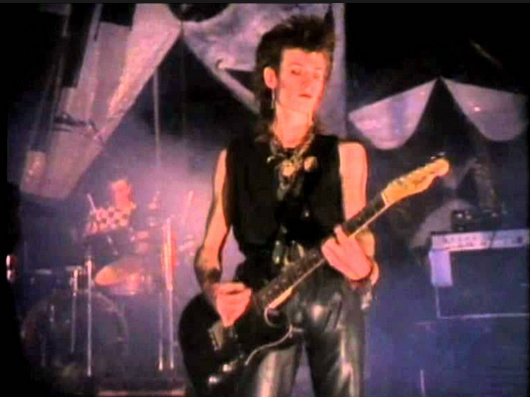 I was totally obsessed with Bauhaus. They were exactly the kind of punk I wanted to be. I’d known about punk rock since I was about 7 or 8 years old. My dad was kinda fascinated with it, even though at the time, he really didn’t listen to music that much. If he saw a picture of punk rockers in a magazine, he’d cut it out and hang it on the fridge. There was Peter Mortyboy, the punk who lost his job at the Rolls Royce factory because he spiked his mohawk with crazy glue and the company declared his head to be a work hazard. His picture was on the fridge for years. There was also a full color clipping of Sigue Sigue Sputnik adorning our brown refrigerator. Sometimes my dad would take me to South Street so we could visit Rocketships & Accessories, a kitschy science fiction toy store. We’d wander around the neighborhood and see the real life punks. Once I saw a guy with a black leather jacket with a bunch of studs on it. “All Pinocchio’s Men” was written on the back in white paint marker. The punk rockers of my youth were colorful and creative. The girls and some of the guys had great make-up. The look was evocative of a tribal sexiness and they didn’t give a fuck if you liked it or not.

By the time I started to really get into the music and the look myself, things had changed a bit. Hardcore (punk) was the dominant sound by the late 80s and very early 90s. I hated it. Bands like Agnostic Front, Minor Threat, Fugazi, 7 Seconds, Agent Orange, Gorilla Biscuits, S.O.D., and Youth Of Today were what a lot of the punks I met were into. I thought all that music sucked. To me, it had more in common with hockey than music or punk rock. The look had devolved as well. Instead of brightly colored Mohawks and black leather, and safety pins, people who called themselves punks were dressing like skinheads or even worse was the whole hoodie and baseball cap look that the straight edge kids wore. It was like somebody had come and sucked all of the sex and art out of it. I’m sure on some level it had to do with survival. I had certainly endured quite a bit of harassment in my small minded neighborhood for even the slightest transgressions of fashion. Perhaps the whole punk community had adopted a cleaner look and a more ferocious sounding music just to keep their heads from getting kicked in as the Reagan/Bush era drew to a close.

Bauhaus re-invigorated me. Hearing their music reminded me of who I was and who I wanted to be. I had noir fantasies about stalking the night, thin and pale like a vampire, breaking glass in gotham alleys on streets where it had just rained. Coincidentally, right around this same time, my dad had brought Anne Rice’s Interview With The Vampire and The Vampire Lestat home from the library. The second book ended with a cliffhanger and the rumor was that the third book was soon to be released. Very exciting!

I was getting into Bauhaus after they broke up. They lasted from 79-83 and I was buying all of their albums in 89/90 or so. I got all of their studio albums, their live album, and a double album which was a compilation of all their singles. The inner jacket of this “greatest hits” record had a picture of 2 VHS tapes which they had also released. One was all of their music videos called Shadows Of Light and the other was a live concert called Archive. I needed to get my hands on those. This was a band that I needed to experience visually as well as aurally. Lots of people don’t even consider them to be a punk band, but they’re all wrong. It may be Art Punk or Gothic Punk, but it’s definitely punk, you fuck-faces.

My high school of 1,300 students had a total of about 11 alternative kids. That’s all the skaters, punks, and new wavers combined. One of them was Danny Catts. He was a senior when I was a sophomore. Tall and thin and pale, he looked almost identical to Daniel Ash, the guitarist of Bauhaus/Love & Rockets. A bunch of these catholic school punks would all be gathered at a table in the cafeteria before classes started. I drifted over their way and got to know them. Some of them were dicks. Danny was cool. We’d bullshit about music and it turned out we all liked the same stuff. He pretty much worshiped Bauhaus as well, and he mentioned that he also really loved Joy Division and Japan. I didn’t know anything about those bands, but filed that shit away in my head for the next trip to The Record Cellar. He told me was trying to learn how to play the guitar. He said he had an electric guitar but that maybe it sucked.

He also said he had the one Bauhaus video, Shadows Of Light. One day he brought it in and loaned it to me. That was perfect! My dad had just hooked up the 2 VCR thing. We had our top loader sitting on top of our new front loader so now we could copy anything we wanted. It’s funny. That stupid fuckin FBI warning at the beginning of every video cassette had me so programmed that I felt like an outlaw just by virtue of having two VCRs on top of my TV. Now that I think about it, we also had Hot Box cable. That is, we paid for basic cable, but we had a special cable box (that we bought off a cop) that enabled us to watch all of the HBO, Prism, Showtime, Cinemax, Pay Per View and smut channels for free. This was during the reign of Iron Mike Tyson. Every time the undefeated heavyweight champ would fight, all my uncles and my dad’s friends who weren’t currently in prison would come over and hang out and watch the fights. Tyson had a habit of knockin’ dudes out before the end of the first round, but since we weren’t paying for the fight, we thought it was great!

One day I invited Danny over to my house to try to get a new band started. We took the el down to his house in Kensington, and he grabbed his guitar, then we hopped back on the train and made our way back to my house. I had my Peavey Classic amplifier in my basement and figured we’d just both plug into it, though I’d recently heard you weren’t supposed to do that. When we got back to my house, Danny took his guitar out of the case, and he was right, it really sucked. It was probably a good guitar at one point, but it looked like somebody painted it purple and pink with a brush and house paint like for your walls. Also, half of the bridge was missing and had been replaced with a block of wood. Never before or since have I seen a guitar with the strings so far away from the fret board. I mean like 2 inches away. I had the feeling that it might be literally impossible to play this guitar. Nevertheless, I gave it a try. I got it in tune, then I plugged it into my amp. It made kind of a cool, nasty sound, but it was quite impossible to play anything but a few open chords down at the end of the neck. Also, it immediately fell radically out of tune. I felt sad for Danny. He had been becoming quite discouraged trying to teach himself guitar, and part of the reason was this impossible instrument.

I had recently learned to play Bela Lugosi’s Dead by watching my new copy of the Bauhaus video he loaned me. I turned up the reverb all the way and played the 3 chord dub reggae dirge. I waited for Danny to start singing but he never did. I know he knew the words, but I think maybe he was shy. Eventually, I heard the words but they were coming out of my mouth. I surprised myself. The whole time I had been thinking I was shy too.

View all posts by skilroywashere